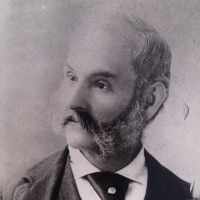 The Life of Charles Hamlin

Put your face in a costume from Charles Hamlin's homelands.

Being a monumental event in the Texas Revolution, The Battle of the Alamo was a thirteen-day battle at the Alamo Mission near San Antonio. In the early morning of the final battle, the Mexican Army advanced on the Alamo. Quickly being overrun, the Texian Soldiers quickly withdrew inside the building. The battle has often been overshadowed by events from the Mexican–American War, But the Alamo gradually became known as a national battle site and later named an official Texas State Shrine.
1837 · Chicago grows to a City

Chicago switched over from a town to a city after many people sailed into the port there or traveled by foot to the fast growing area.
1857 · Oldest tobacco shop in the Country

Iwan Ries and Company is one of the oldest family owned tobacco companies in North America and was originally owned by Edward Hoffman. Realizing that he could not run the company alone, Hoffman recruited his nephew, Iwan Ries to join him. The name of the Company changed from E. Hoffman and Co. when Edward Hoffman retired in 1898.