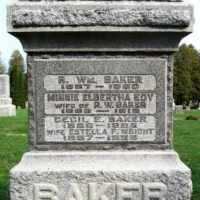 The Life of Richard William

When Richard William Baker was born on 1 July 1867, in England, United Kingdom, his father, John Baker, was 37 and his mother, Susan Jane Thayer, was 32. He married Minnie Elbertha Edy on 8 May 1893, in Ancaster, Hamilton-Wentworth, Ontario, Canada. They were the parents of at least 1 son and 4 daughters. He lived in Churchill, Somerset, England, United Kingdom in 1871 and Ancaster, Wentworth, Ontario, Canada in 1881. He died on 21 October 1950, at the age of 83.

Put your face in a costume from Richard William's homelands.