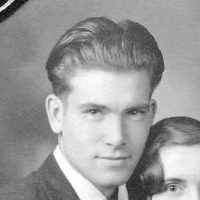 The Life of Norben Charles

When Norben Charles Arterburn was born on 13 October 1904, in Kansas, Edgar, Illinois, United States, his father, Early Arterburn, was 22 and his mother, Emily Alice Huffman, was 17. He married Bedelia Iona Martin on 12 May 1929, in Denver, Colorado, United States. They were the parents of at least 3 sons and 1 daughter. He died on 1 January 1987, in Council, Adams, Idaho, United States, at the age of 82, and was buried in Hagerman Cemetery, Hagerman, Gooding, Idaho, United States.

Put your face in a costume from Norben Charles's homelands.

When W. D. Boyce was visiting London, he encountered a boy that helped him find his destination. The boy refused the tip that Boyce offered to him and told him that he was just doing his daily good turn. Being inspired, Boyce incorporated the Boy Scouts of America to help teach young men how to have an attitude of service always. Since its foundation, The Boy Scouts of America has become one of the largest Scouting organizations in the United States. Around 110 million people have been participants at some time in their life. The BSA was established to help young people make better choices in life and showing selflessness by serving the community.
1927

Of uncertain origin. It invites the interpretation ‘Arthur's burn,’ but no place with such a name is known in the British Isles, and the surname is not found in current records. It may well be a variant of Atteberry .

The second Sunday in May 1915 Early Arterburn hitched up "Ole Nig" our buggy mare. He told us, his children, that we were going to drive out to a large strawberry patch located on the right -of-way of …