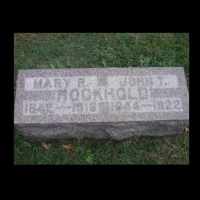 The Life of Mary Rebecca

Put your face in a costume from Mary Rebecca's homelands.

1 English: habitational name from either of two places named Crowle. The one in Worcestershire is named with an Old English word crōh ‘nook’, ‘corner’ + lēah ‘woodland clearing’; the other, in Lincolnshire, takes its name from an Old English river name meaning ‘winding’.2 Americanized spelling of German Graul .