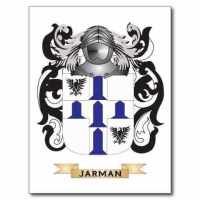 When Thomas Jarman was born on 27 September 1568, in Nantmel, Radnorshire, Wales, United Kingdom, his father, Richard Jarman, was 36 and his mother, Gwen Griffith, was 18. He married Audrey Edwards on 7 November 1597, in Tingrith, Bedfordshire, England. They were the parents of at least 3 sons and 1 daughter. He died on 13 April 1648, in his hometown, at the age of 79.