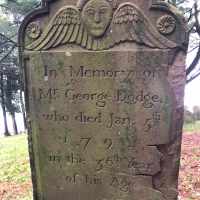 When George Dodge I was born on 6 August 1738, in Colchester, New London, Connecticut, United States, his father, David Britain Dodge, was 46 and his mother, Rebecca Yeomans, was 40. He married Jemmima Wise on 29 January 1761, in Colchester, Hartford, Connecticut Colony, British Colonial America. They were the parents of at least 2 sons and 7 daughters. He died on 5 January 1794, in Springfield, Otsego, New York, United States, at the age of 55, and was buried in Middle Village Cemetery, Springfield, Otsego, New York, United States.