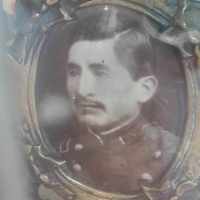 The Life Summary of Manuel

When Manuel Garnica was born on 25 December 1882, in Santa Victoria, Salta, Argentina, his father, Doroteo Garnica, was 25 and his mother, Tomasa Chaparro, was 25. He married Vicenta Escalier in 1915, in Salta, Argentina. They were the parents of at least 4 sons and 8 daughters. He died on 9 March 1964, at the age of 81.

Put your face in a costume from Manuel's homelands.