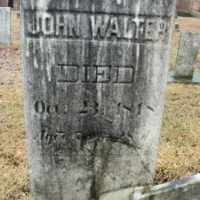 Pennsylvania was always against slavery, even though the first settlers, including Penn, came with slaves. Slavery was not prominent in the area.
1781 · The First Constitution

Serving the newly created United States of America as the first constitution, the Articles of Confederation were an agreement among the 13 original states preserving the independence and sovereignty of the states. But with a limited central government, the Constitutional Convention came together to replace the Articles of Confederation with a more established Constitution and central government on where the states can be represented and voice their concerns and comments to build up the nation.
1800 · Movement to Washington D.C.

German, Swedish, and English: from a Germanic personal name composed of the elements wald ‘rule’ + heri, hari ‘army’. The personal name was introduced into England from France by the Normans in the form Walt(i)er, Waut(i)er.