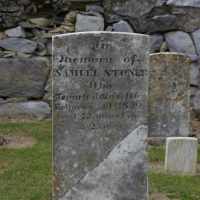 English (Sussex): topographic name from Middle English ston(e) ‘stone’ + -er, used for someone who lived by a prominent rock or stone, or perhaps who came from a place called Stone, although this formation is more rare. See Stone and compare Stoneman .Americanized form (translation into English) of German Steiner .