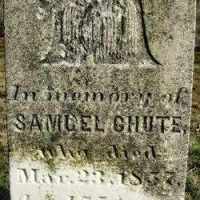 1 English: habitational name from any of several places in Hampshire and Wiltshire named with Chute, from Celtic cēd ‘wood’. Compare Welsh coed.2 Americanized form of German Schütt, a variant of Schütte ( see Schutte ).

Samuel and Elizabeth lived several years at the "Joggins," Digby Co. About 1809 they moved to near Harborville shore on the Bay of Fundy, Cornwallis, Kings Co., where he lived an honest, sober, pious …