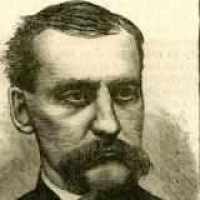 The Life Summary of Algernon Sidney

Put your face in a costume from Algernon Sidney's homelands.

English (of Norman origin), French, and German: from the personal name Giselbert, composed of the ancient Germanic elements gīsil ‘pledge, hostage, noble youth’ (see Giesel ) + berht ‘bright, famous’. This personal name enjoyed considerable popularity in England during the Middle Ages, partly as a result of the fame of Saint Gilbert of Sempringham (1085–1189), the founder of the only native English monastic order.Americanized form of one or more similar (like-sounding) Jewish surnames.History: The Devon family of Gilbert can be traced to Geoffrey Gilbert (died 1349), who represented Totnes in Parliament in 1326. His descendants included Sir Humphrey Gilbert (died 1583), who discovered Newfoundland. — Étienne Gilbert from Aulnay in Vienne, France, married Marguerite Thibault in Neuville, QC, in 1683. Louis Gilbert dit Comtois from Besançon in Doubs married Anne Jacques in Charlesbourg, QC, in 1722. Pierre Gilbert from Barbezieux-Saint-Hilaire in Charente, France, married Marie-Angélique Dufour in Petite-Rivière-Saint-François, QC, in 1756. Charles Dupuis dit Gilbert from Rosnay in Indre, France, married Marie-Jeanne Brunet in Sainte-Foy, QC, in 1741.

I, James Henry Rollins, began my life on the 27th of May, 1816 in Lima, Livingston, New York. I was the son of John Porter Rollins, who was born about 1794 in Rutland, Vermont, and Keziah Ketura Van …