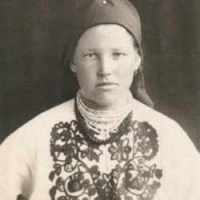 The Life of Paraschiva

Put your face in a costume from Paraschiva's homelands.

Russia and the Ottomans signed the treaty of San Stefano, granting independence to Serbia. With the Treaty of San Stefano (and subsequent negotiations in Berlin) in the wake of the last Russo-Turkish War, the Ottoman Empire lost its possession of numerous territories including Bulgaria, Montenegro, Romania, and Serbia.
1895

Romanians in Constantinople were massacred.

Tommy Henrich: "It's from this tiny, two-room, log house, on the prairie of Saskatchewan, that the lives of every member of this Family were launched. Most Axenty members can trace an ancestor who gre …