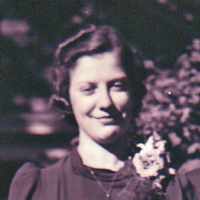 The Life of Leona Emma

When Leona Emma Gauthier was born on 17 September 1920, in Tupper Lake, Altamont, Franklin, New York, United States, her father, Cyprien Samuel GAUTHIER, was 27 and her mother, Marie Hemond, was 25. She married Joseph Wilfrid Adrien Prénoveau on 18 September 1939, in Montreal, Quebec, Canada. They were the parents of at least 2 sons and 2 daughters. She lived in Brasher, St. Lawrence, New York, United States in 1930. She died on 12 February 1973, in Bristol, Hartford, Connecticut, United States, at the age of 52.

Put your face in a costume from Leona Emma's homelands.

During WWI there was a dog from Connecticut that made a name for himself, his name was sergeant stubby. He was considered the official mascot of the 102nd infantry. He saved his regiment from suprise mustard attacks, comforted those that had been wounded, and even caught a German soldier and held him there until troops found him. He had his own uniform and everything.
1935 · The FBI is Established

French: from a Germanic personal name composed of the elements wald ‘rule’ + hari, heri ‘army’ ( see Walter ). This name is also found in Switzerland and may have been brought to the U.S. from there.