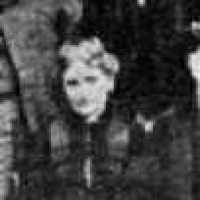 When Elizabeth Hollard was born on 16 April 1835, in Charlton Mackrell, Somerset, England, United Kingdom, her father, Charles Hollard, was 23 and her mother, Ann Hilborne, was 23. She married Hart Udy on 22 April 1855. They were the parents of at least 6 sons and 3 daughters. She died on 2 March 1926, in Petone, Lower Hutt, Wellington, New Zealand, at the age of 90, and was buried in Greytown, Wellington, New Zealand.

The Maori sign the Treaty of Waitangi giving control to the British in exchange for protection and guaranteed Maori possession of their lands.
1854 · The Crimean War

The Crimean War was fought between Russia and an alliance of Britain, France, Sardinia and Turkey on the Crimean Peninsula. Russia had put pressure on Turkey which threatened British interests in the Middle East.
1860 · First Taranaki War