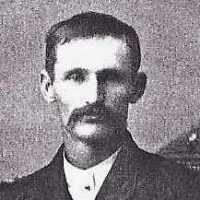 The Life of Miles Lock

Put your face in a costume from Miles Lock's homelands.

English and Irish: from the Old Norse personal name þorkell, a contracted form of a name composed of the elements þórr, name of the Scandinavian god of thunder ( see Thor ) + ketill ‘cauldron’. The personal name Thurkill or Thirkill was in use throughout England in the Middle Ages; in northern England it had been introduced directly by Scandinavian settlers, whereas in the South it was the result of Norman influence. This surname and its variants are especially common in East Anglia. In Ireland the Old Norse name was adopted as a Gaelic personal name (Thorcall), which generated the surnames McCorkle and Corkill .