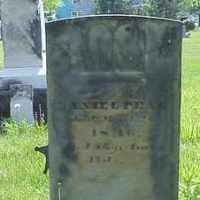 """At the end of the Second Continental Congress the 13 colonies came together to petition independence from King George III. With no opposing votes, the Declaration of Independence was drafted and ready for all delegates to sign on the Fourth of July 1776. While many think the Declaration was to tell the King that they were becoming independent, its true purpose was to be a formal explanation of why the Congress voted together to declare their independence from Britain. The Declaration also is home to one of the best-known sentences in the English language, stating, “We hold these truths to be self-evident, that all men are created equal, that they are endowed by their Creator with certain unalienable Rights, that among these are Life, Liberty and the pursuit of Happiness."""""""
1791

1 English: topographic name for someone living by a pointed hill (or regional name from the Peak District (Old English Pēaclond) in Derbyshire), named with Old English pēac ‘peak’, ‘pointed hill’ (found only in place names). This word is not directly related to Old English pīc ‘point’, ‘pointed hill’, which yielded Pike ; there is, however, some evidence of confusion between the two surnames.2 Possibly also Irish: reduced form of McPeak .