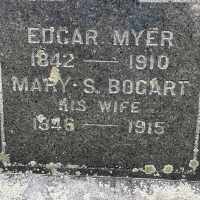 The Life Summary of Mary Susan

Put your face in a costume from Mary Susan's homelands.

Dutch: variant, archaic or Americanized, of Bogaart, a variant of Bogaard . The surname Bogart is no longer found in the Netherlands. Compare Vandebogart .Probably also an Americanized form of Flemish and Dutch Bogaert , a cognate of 1 above.History: This surname is recorded in Beverwyck in New Netherland (now Albany, NY) in the mid 17th century, but it was also brought independently to North America by other bearers.