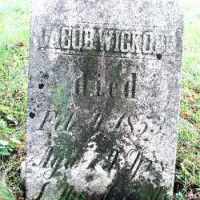 "During the six-year Revolutionary war, more of the fights took place in New Jersey than any other colony. Over 296 engagements between opposing forces were recorded. One of the largest conflicts of the entire war took place between Morristown and Middlebrook, referred to as the ""Ten Crucial Days"" and remembered by the famous phrase ""the times that try men's souls"". The revolution won some of their most desperately needed victories during this time."

Variant of Wyckoff , a surname of East Frisian origin.