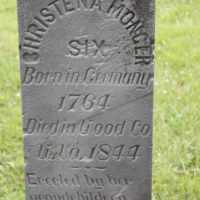 The Life of Christena Margaret

When Christena Margaret Six was born on 2 September 1754, in Frederick, Maryland, British Colonial America, her father, Johannes Conrad Six, was 24 and her mother, Marguerite Catherine Bonnett, was 29. She married John Charles Monger about 1786, in Virginia, United States. They were the parents of at least 1 son and 3 daughters. She died in 1844, in Wood, Virginia, United States, at the age of 90, and was buried in Harkins Cemetery, Vienna, Wood, West Virginia, United States.

Put your face in a costume from Christena Margaret's homelands.

1 French and German: from a personal name (Latin Sixtus, a variant of Sextus ‘sixth(-born)’), borne by various saints and popes in the early centuries of the Christian era, and subsequently adopted in their honor.2 French: nickname from Old French six ‘six’ (Latin sex), given for some anecdotal reason now lost; the surnames Deux (‘two’), Huit (‘eight’), and Dix (‘ten’) also exist, but all are rare.