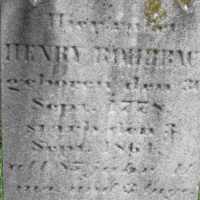 The Life of Henry Heinrich

Put your face in a costume from Henry Heinrich's homelands.

Pennsylvania was always against slavery, even though the first settlers, including Penn, came with slaves. Slavery was not prominent in the area.
1781 · The First Constitution

German and Swiss German: habitational name from any of numerous places called Rohrbach (‘reed brook’ or ‘channel brook’) in many parts of Germany, Switzerland, and Austria.