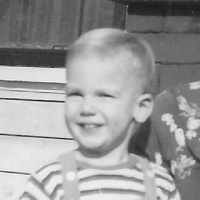 The Life Summary of William Shepherd

Put your face in a costume from William Shepherd's homelands.

1966 · The Freedom of Information Act