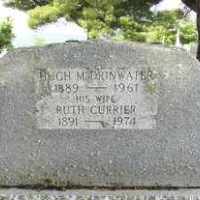 The Life Summary of Hugh Marshall

Put your face in a costume from Hugh Marshall's homelands.

On January 27, 1895, College Hall catches on fire and is fully consumed within one hour. During the fire, many students and faculty work together to save many of the items in the building. Some of these are library books. They save the books by piling them onto the rugs and dragging them out of the burning building. College Hall is then later rebuilt and renamed Davis Hall after Governor John W. Davis.

English: nickname from Middle English drink(en) ‘(to) drink’ + water ‘water’, possibly used of someone who claimed to prefer water to the sour ale he was offered by the ale wife or inn keeper. In the Middle Ages weak ale was the universal beverage among the poorer classes, and so cheap as to be drunk like water, whereas water itself was only doubtfully potable. A 13th-century writer, describing the extreme poverty of the Franciscans when they first settled in London (1224), writes: ‘I have seen the brothers drink ale so sour that some would have preferred to drink water’. Compare French Boileau .