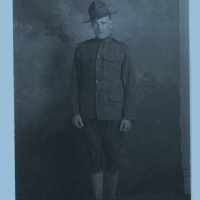 The Life Summary of Edgar Amos

Put your face in a costume from Edgar Amos's homelands.

Scottish (western Scotland): habitational name from Buchanan in Stirlingshire, perhaps named with Gaelic buth chanain ‘house of the canon’.Irish: adopted for Ó Buadhachanáin, see Bohannon .History: This is the name of a Scottish clan associated with lands on the eastern shores of Loch Lomond and in the Lennox. — The name Buchanan was brought independently to North America from Scotland by several different bearers in the 17th and 18th centuries. George Buchanan came to MD in 1698. — James Buchanan (1791–1868), 15th President of the US (1857–61), was born near Mercersburg, PA, the son of a successful land speculator and store keeper, who had emigrated to PA from Scotland in 1783.