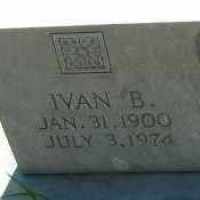 The Life Summary of Ivan Bertram

Put your face in a costume from Ivan Bertram's homelands.

English and Scottish (Angus): from the Middle English byname or personal name Cobbe, Cobba, or its Old Norse cognate Kobbi, which are probably from an element meaning ‘lump’, used to denote a large man.Irish: shortened form of McCobb , a patronymic from the personal name Hob, an English pet form of Robert .