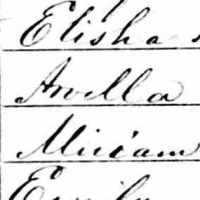 The Life of Arvilla

Put your face in a costume from Arvilla's homelands.

War of 1812. U.S. declares war on Britain over British interference with American maritime shipping and westward expansion.
1819 · 67 Streets in Brooklyn By 1819

by Amy Tanner Thiriot, February 7, 2013, TheAncestorFiles. (See link to article in Sources.) Several of John Tanner's sons spent most of their lives in the northeastern United States. The oldest wa …