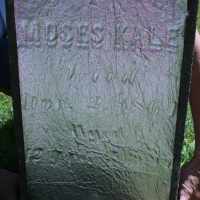 The Life of Moses

1 Dutch: nickname from kaal ‘bald’.2 English: habitational name from the villages of East and West Keal in Lincolnshire, which are named from Old Norse kjǫlr ‘ridge’.3 Perhaps an altered spelling of German Köhl ( see Kohl ).