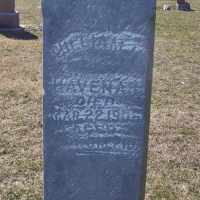 The Life Summary of William T.

Put your face in a costume from William T.'s homelands.

Harrison was formally incorporated as a village in 1850 with a population of 940.