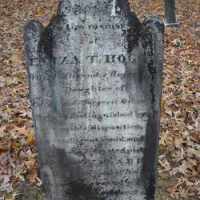 The Life of Eliza Tabitha

Put your face in a costume from Eliza Tabitha's homelands.

New Bern had been the capital of North Carolina in its early days. In 1792, the capital was moved to Raleigh because it was more the center of the state.
1803

English: from the Old Norse personal name Ásbjorn, composed of the elements ás ‘god’ + björn ‘bear’. This was established in England before the Conquest, in the late Old English form Ōsbern, and was later reinforced by Norman Osbern. The surname Osborne has also been widely established in Ireland since the 16th century.