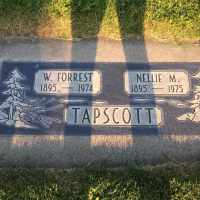 The Life Summary of Nellie M

When Nellie M Thompson was born on 13 March 1895, in Auburn Township, Clark, Illinois, United States, her father, Joseph Edwin Thompson, was 27 and her mother, Jennett M Snowden, was 24. She had at least 2 sons and 1 daughter with William Forest Tapscott. She died on 21 January 1975, in Yakima, Yakima, Washington, United States, at the age of 79.

Put your face in a costume from Nellie M's homelands.