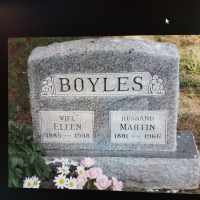 The Life Summary of Bertha Ellen

Put your face in a costume from Bertha Ellen's homelands.

English: from the Middle English female personal name Casse, a pet form of Cassandra. This was the name of an ill-fated Trojan prophetess of classical legend, condemned to foretell the future but never be believed; her story was well known and widely popular in medieval England. The name is of uncertain, possibly non-Greek, origin.Irish (Kilkenny and Laois): from Ó Cais ‘descendant of the curly-haired one’.