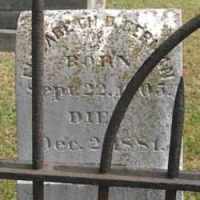 The Life of Elizabeth Dove

Put your face in a costume from Elizabeth Dove's homelands.

Lewis and Clark set out from St. Louis, MO to explore the West.
1804 · The Twelfth Amendment

With not having a very clear statement in the Constitution about Presidents and Vice Presidents, the Twelfth Amendment was Born. Before the Electoral College could cast two votes for those that they saw fit for President. This was changed to just one electoral vote for President and one electoral vote for Vice President. With the amount of people even allowed to vote, there was no way for there to be a tie during the elections.
1825 · The Crimes Act

English: French Huguenot name, probably a habitational name from the village of Roncesvalles in Navarra in the Basque country (French name Roncevaux).