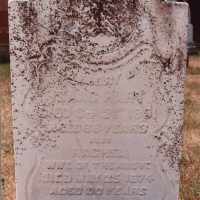 The Life of Rachel

When Rachel Terwilliger was born on 29 April 1791, in Shawangunk, Ulster, New York, United States, her father, Josiah Terwilliger, was 33 and her mother, Rachael Mills, was 27. She married Isaac Hart on 21 April 1810, in Schenectady, Schenectady, New York, United States. They were the parents of at least 12 sons and 4 daughters. She lived in Oro Township, Simcoe, Ontario, Canada in 1871. She died on 25 May 1874, at the age of 83, and was buried in Craighurst, Oro-Medonte, Simcoe, Ontario, Canada.

Of Dutch origin: possibly a habitational name meaning ‘at William's’.