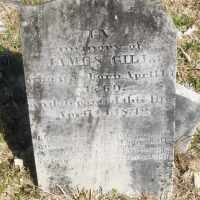 The Life of Samuel James

Put your face in a costume from Samuel James's homelands.

On June 28, 1776, the Battle of Sullivan's Island takes place on Sullivan's Island, South Carolina. Since it is so close to Charelston, the battle is sometimes referred to as the First Siege of Charleston. This is the first time that the Americans had a victory against a land and sea attack by the British.
1783 · A Free America

1 English: from a short form of the personal names Giles , Julian , or William . In theory the name would have a soft initial when derived from the first two of these, and a hard one when from William or from the other possibilities discussed in 2–4 below. However, there has been much confusion over the centuries.2 Northern English: topographic name for someone who lived by a ravine or deep glen, Middle English gil(l), Old Norse gil ‘ravine’.3 Scottish and Irish: reduced Anglicized form of Gaelic Mac Gille (Scottish), Mac Giolla (Irish), patronymics from an occupational name for a servant or a short form of the various personal names formed by attaching this element to the name of a saint. See McGill . The Old Norse personal name Gilli is probably of this origin, and may lie behind some examples of the name in northern England.