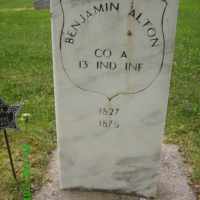 English:habitational name from any of the many places called Alton, in Derbyshire, Dorset, Hampshire, Leicestershire, Staffordshire, Wiltshire, Worcestershire, and elsewhere. The origin of the placename is various: Alton in Derbyshire and Alton Grange in Leicestershire probably have as their first element Old English (e)ald ‘old’. Those in Hampshire, Dorset, and Wiltshire are at the sources of rivers, and are named in Old English as ‘settlement (tūn) at the river source (ǣwiell)’. Others derive from various Old English personal names; for example, the one in Staffordshire is formed with an unattested personal name, Ælfa, and one in Worcestershire, Eanulfintun in 1023, is ‘settlement associated with (-ing) Ēanwulf’. The surname may also be from Auton Stile in Durham Saint Oswalds (Durham), which is recorded as Altonec. 1200.variant of Olton . Compare Allton .

Ben Alton Jr. had been a cooper in Ohio. He operated a brick making business and later a furniture store in Fremont. He had several laborers living with him when the 1870 census was taken. Mapsey G …