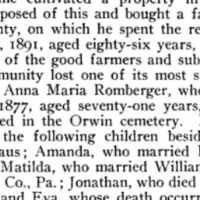 The Life of Anna Maria

Harrisburg had important parts with migration, the Civil War, and the Industrial Revolution.
1825 · The Crimes Act

German: habitational name for someone from any of the various places called Romberg .