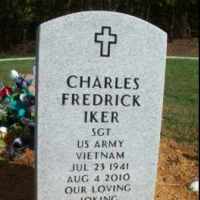 Put your face in a costume from Charles Fredrick's homelands.

Squaw Valley, California, United States hosts Winter Olympic Games.
1 Norwegian and Swedish (Åker): from åker ‘plowed field’, applied either as an ornamental or a topographic name.2 Possibly a variant of English, German, and Dutch Acker or of German Eicher .