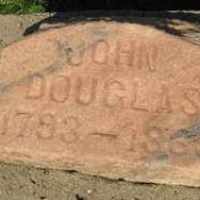 Put your face in a costume from John Ellis's homelands.

War of 1812. U.S. declares war on Britain over British interference with American maritime shipping and westward expansion.
(1997: 6004;2007: 10898; 2010: 14862)Scottish and English (Durham and Northumbria): variant of Douglas .History: William Douglass, a physician recognized for his identification and description of an epidemic of scarlet fever, was born c. 1691 in Gifford, Haddington County, Scotland, and settled in Boston in 1718. The abolitionist, orator, and journalist Frederick Douglass assumed the name after escaping from slavery in 1838 and traveling to Massachusetts. Son of a white father and a slave with some Indian blood, he was born Frederick Augustus Washington Bailey c. 1817 in Tuckahoe, MD.