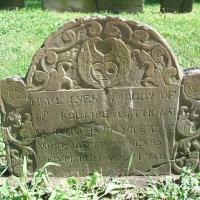 When Robert Cathcart was born on 18 November 1673, in Ayr, South Ayrshire, Scotland, United Kingdom, his father, Thomas Cathcart, was 39 and his mother, Elizabeth Mitchell, was 40. He married Phebe Coleman about 1691, in Nantucket, Nantucket, Massachusetts Bay Colony, British Colonial America. They were the parents of at least 6 sons and 6 daughters. He died on 21 March 1718, in Boston, Suffolk, Massachusetts, United States, at the age of 44, and was buried in Granary Burying Ground, Boston, Suffolk, Massachusetts, United States.

In his book about The History of Martha's Vineyard, Dr. Charles Banks claims that Robert Gershom Cathcart arrived in Martha's Vineyard still carrying a bullet in his body from clan warfare in his nati …