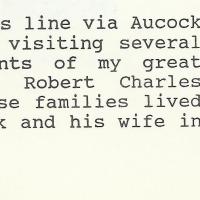 The Life of Charles Robert

"The popular childhood rhyme ""London Bridge is Falling Down"" refers to the infamous overpass above the Thames River. By the 19th century the bridge had started to fall apart."
1839

A REPORT GIVEN AT THE JAMES RICHARD HAWKINS FAMILY RE UNION BY OSWALD T HAWKINS July 2, 1966

I will try to give you some of the highlights of our research. Some of you will remember me talking about a Mrs. Humphreys of Surry County, England. She sent me some records she had obtained from the …