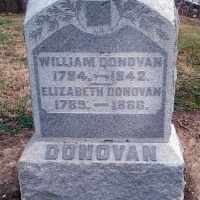 While the growth of the new nation was exponential, the United States didn’t have permanent location to house the Government. The First capital was temporary in New York City but by the second term of George Washington the Capital moved to Philadelphia for the following 10 years. Ultimately during the Presidency of John Adams, the Capital found a permanent home in the District of Columbia.
Irish (originally of County Limerick, later of Counties Cork and Kilkenny): reduced Anglicized form of Gaelic Ó Donndubháin ‘descendant of Donndubhán’, a personal name composed of the elements donn ‘brown-haired man’ or ‘chieftain’ + dubh ‘black’ + the diminutive suffix -án.