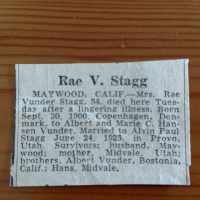 The Life of Raghild Rae

Put your face in a costume from Raghild Rae's homelands.

World War I. Denmark remains neutral throughout the war.
1917

Norwegian: habitational name from any of about 10 farmsteads named Lunder, from the indefinite plural form of lund ‘grove’.