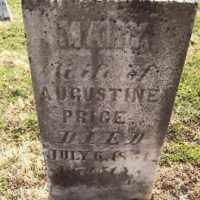 While the growth of the new nation was exponential, the United States didn’t have permanent location to house the Government. The First capital was temporary in New York City but by the second term of George Washington the Capital moved to Philadelphia for the following 10 years. Ultimately during the Presidency of John Adams, the Capital found a permanent home in the District of Columbia.
1812 · Monumental Church Built

Possibly a variant of German Schrag .

Price Family Bible that Beulah Carl had stated that Augustine Price had married a Mary and had both their Birth Dates and Augustine's death date Augustine Price B.- 16 June 1800 D.- 9 …