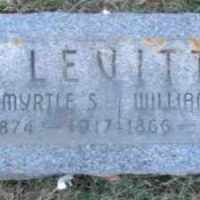 The Life of Myrtle Sarah

Put your face in a costume from Myrtle Sarah's homelands.

A federal law which reversed most of the penalties on former Confederate soldiers by the Fourteenth Amendment. The Act affected over 150,000 troops that were a part of the Civil War.
1884 · There is now a Capital Building

English: occupational name for someone who built mines, either for the excavation of coal and other minerals, or as a technique in the medieval art of siege warfare. The word represents an agent derivative of Middle English, Old French mine ‘mine’ (a word of Celtic origin, cognate with Gaelic mein ‘ore’, ‘mine’).