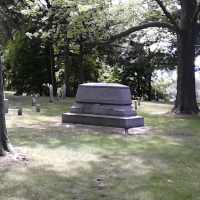 The Life of Isaac Chamberlain

Put your face in a costume from Isaac Chamberlain's homelands.

The Revolutionary War ended with the signing of the Treaty of Paris which gave the new nation boundries on which they could expand and trade with other countries without any problems.
1789

English: from northern Middle English Spragge, either a personal name or a byname meaning ‘lively’, a metathesized and voiced form of Spark 1.