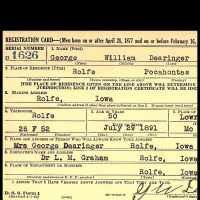 Like the Boy Scouts of America, The Girl Scouts is a youth organization for girls in the United States. Its purpose is to prepare girls to empower themselves and by acquiring practical skills.
(1997: 291;2007: 539; 2010: 600)Americanized form of German Dieringer or Thüringer (see Thuringer ), or, alternatively, perhaps a shortened and altered form of Swiss German Därendinger, a variant of Derendinger, a habitational name for someone from Derendingen in the canton of Solothurn.History: Bearers of the surname Dearinger trace their origin to Michael Dearinger and his brother(s), who were born in the middle of the 18th century in Westmoreland County, PA. Their original surname was probably Thüringer (their father was reportedly Johannes Thüringer from Zweibrücken in Rhineland-Palatinate, Germany, where the surname Dieringer is still found), but according to some other sources their ancestors were surnamed Därendinger and lived in Switzerland and/or Alsace, France (where the surname is still found in the form Derendinger).

George William Dearinger married Clara Florence Williams in about 1911. Clara was 16 and George was 20. They had twins in 1914, Ira and Irene. My Grandpa Ray Dearinger was born in 1915 and was the you …