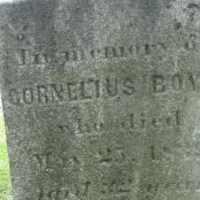 The Life of Cornelius Schermerhorn

When Cornelius Schermerhorn Bovee was born on 3 March 1807, in Montgomery, Tennessee, United States, his father, Matthias Jochem Bovee, was 41 and his mother, Maria Cathrina Schermerhorn, was 37. He married Eliza Sparks on 1 July 1833. They were the parents of at least 2 sons and 2 daughters. He died on 25 May 1839, in Riga, Monroe, New York, United States, at the age of 32, and was buried in Riga Cemetery, Riga, Monroe, New York, United States.

Put your face in a costume from Cornelius Schermerhorn's homelands.

War of 1812. U.S. declares war on Britain over British interference with American maritime shipping and westward expansion.
1819 · Panic! of 1819