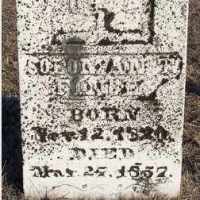 The Life of Solomon Tompkins

Put your face in a costume from Solomon Tompkins's homelands.

A United States law to provide financial relief for the purchasers of Public Lands. It permitted the earlier buyers, that couldn't pay completely for the land, to return the land back to the government. This granted them a credit towards the debt they had on land. Congress, also, extended credit to buyer for eight more years. Still while being in economic panic and the shortage of currency made by citizens, the government hoped that with the time extension, the economy would improve.
1823

English: nickname from Middle English finch ‘finch’ (Old English finc). In the Middle Ages this bird had a reputation for stupidity. It may perhaps also in part represent a metonymic occupational name for someone who caught finches and sold them as songsters or for the cooking pot. The surname is found in all parts of Britain but is most common in Lancashire. See also Fink .