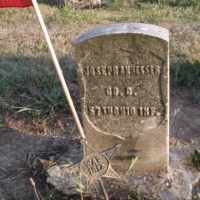 The Life of Francois Joseph

When Francois Joseph Annesser was born on 23 June 1829, in Strasbourg, Bas-Rhin, Alsace, France, his father, Jean Michael Annesser, was 26 and his mother, Mary Anna Sholl, was 26. He married Abigail Meeker on 4 November 1855, in Ottawa, Ohio, United States. They were the parents of at least 6 sons and 2 daughters. He died on 27 November 1895, in Wapakoneta, Auglaize, Ohio, United States, at the age of 66.

Put your face in a costume from Francois Joseph's homelands.

The Arc de Triomphe was made specifically right before Napoleon I victory in Austerlitz in 1806 and took 30 years to build. Sadly Napoleon I would not live to see the creation finished. It’s name means triumphal arch. Assassination attempts were made on both Charles De Gaulle and Jacques Chirac from this location. Even though its name means triumph it has seen many times where Germans triumphally marched under it after winning battles.
1836 · Kirtland Temple Dedicated