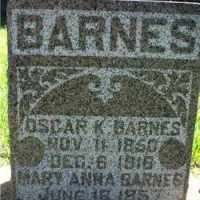 Put your face in a costume from Oscar K.'s homelands.

Caused by many crimes and breaking the Tenure of Office Act, Many Senators and House Representatives became angry with President Johnson and began discussions of his Impeachment. After a special session of Congress, the Articles of Impeachment were approved by the House and then the Senate. Making Andrew Johnson the first President to be Impeached.
1 English: topographic name or metonymic occupational name for someone who lived by or worked at a barn or barns, from Middle English barn ‘barn’, ‘granary’. In some cases, it may be a habitational name from Barnes (on the Surrey bank of the Thames in London), which was named in Old English with this word.2 English: name borne by the son or servant of a barne, a term used in the early Middle Ages for a member of the upper classes, although its precise meaning is not clear (it derives from Old English beorn, Old Norse barn ‘young warrior’). Barne was also occasionally used as a personal name (from an Old English, Old Norse byname), and some examples of the surname may derive from this use.3 Irish: possibly an Anglicized form of Gaelic Ó Bearáin ‘descendant of Bearán’, a byname meaning ‘spear’.