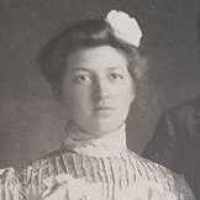 The Life Summary of Clara Evelyn

Put your face in a costume from Clara Evelyn's homelands.

(1997: 6153;2007: 12659; 2010: 17178)English and Scottish: from the personal name Ambrose (French Ambroise, Latin Ambrosius, from Greek ambrosios ‘immortal, divine’), which was popular throughout Christendom in medieval Europe. Its popularity was due in part to the fame of Saint Ambrose (c. 340–397), one of the four Latin Fathers of the Church, the teacher of Saint Augustine. In North America, the English form of the surname has absorbed cognates from other languages, e.g. Czech, Slovenian, and Croatian Ambrož (see Ambroz ), and also their derivatives, e.g. the Slovenian patronymic Ambrožič.Irish: from Mac Ambróis ‘son of Ambrose’ (see 1 above); a West Munster name, which has also been Anglicized as McCambridge .

Published in Maine Woods on October 5, 1911. When winter comes and the air is filled with snow flakes, the day will be brightened by the pleasant memory of a visit, the last of August with my old fri …